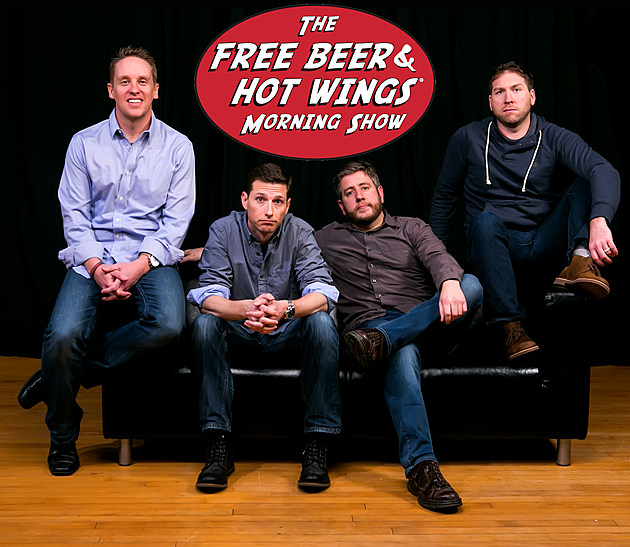 The Free Beer & Hot Wings Show began as an afternoon show in Omaha, Nebr., at non-commercial radio station KIWR in March 1997. The show was comprised of two former Central Michigan University roommates who eventually moved to mornings several months later. They remained there until summer 2000, when they moved to WBON in Knoxville, Tenn. In June 2002, the show moved to New Jersey, where it was simulcast on WTHK in Trenton, N.J., and WCHR on The Jersey Shore. “The Free Beer & Hot Wings Show” began full syndication in 2004 with the addition of 97.9 WGRD in Grand Rapids, and is now heard on radio stations in 15 states

WHERE DID THE NAME COME FROM?

Instead of calling the show “The Gregg & Chris Show,” which by all estimations would have been the most boring sounding radio show in the world, the decision was made to call it “The Free Beer & Hot Wings Show,” which seemed far more attention grabbing. It was admittedly nothing more than a cheap ploy to get people to listen under the false pretense that they may actually have a chance to win beer and/or hot wings. However, it was not intended that those two things would become permanently synonymous and attached to Gregg and Chris as nicknames, but that’s what happened and now they have to live with the consequences of their B.S. forever.

Enter to be a Dumber Than The Show Trivia Contestant

Show More
The Story Behind 'Dub the Coyote' the Weirdest Wichita Falls Meme
Does My Wichita Falls Neighborhood Have the Best Christmas Lights
'Tis the Season to Watch Out for These Scams Throughout TX
Who in Wichita Falls Won the Free Thanksgiving from United?
With Thanksgiving this week we wanted to share our winners for our big United Supermarkets giveaway.
Stryker
I Searched 'Wichita Falls' on Reddit with Safe Search Turned Off
I guess I didn’t realize that Reddit is swinger heaven and many of those swingers are right here in Wichita Falls.
Johnny Thrash
What Do We Have to Do in Wichita Falls to Get the New Cinemark Screens?
Have you seen these things yet? Holy crap does this look like an immersive movie experience.
Stryker
Texoma's Most Wanted Fugitives of the Week November 18, 2022
Wichita Falls Crime Stoppers has released the latest list of Texoma's most wanted fugitives of the week.
Johnny Thrash
Wichita Falls' Iconic Big Blue Was Almost Even Bigger?
Looks like the plan was to expand several decades, but that never came to be. So what happened?
Stryker
Former Rider Raider Drafted to XFL Team for 2023
The XFL is making a comeback next year and Wichita Falls might recognize someone in the league next year.
Stryker
Wichita Falls Crime Stoppers Issues 'Fresh 48' for Burglary
The Wichita Falls Police Department could use your help getting stolen firearms off the street.
Johnny Thrash
Proposed Texas Bill Would Allow Pregnant Drivers to Use HOV Lanes. Agree?
Many proposed bills never make it through. However, if House Bill 521 were to pass, it would take effect in September of next year.
Tara Holley
Texas Window Painter Shows Off Impressive Skills in Viral Video
Laura Thompson is a full-time artist located in Texas that specializes in window and wall painting
Emily Claire
Ranking the Fantasy of Lights Before it Opens in Wichita Falls
Probably our favorite Christmas tradition in Wichita Falls is the Fantasy of Lights and here are my favorite displays I look forward to every year.
Stryker
What is This Strange Light in the Wichita Falls Sky?
What have we here?
Johnny Thrash
Former Impractical Joker Joe Gatto Coming to Wichita Falls
Miss Joe on the show? Well good news! He is coming right here to Wichita Falls next year.
Stryker